This happens to a lot of Nvidia users especially users of newer cards like the RTX series.  If for example you are trying to boot and install Linux and you get a black and white grub2 screen instead of a nice graphical welcome installer, you probably suffer from this bug.  It is normally followed by the user booting and finding they just have a blank/black screen.

Here is the quick flow of steps to fix it:

If you get a black grub screen when booting Linux Mint install instead of the graphical Mint you probably have a newer graphics card especially an Nvidia RTX etc...

The problem is that sometimes the kernel and card do not play nicely and the video card is not able to set a resolution.

Solution - By using nomodeset it bypasses this issue.

1.) On the grub screen hit "e" over top of the default kernel that grub will boot (normally indicated with a star).  Example below. 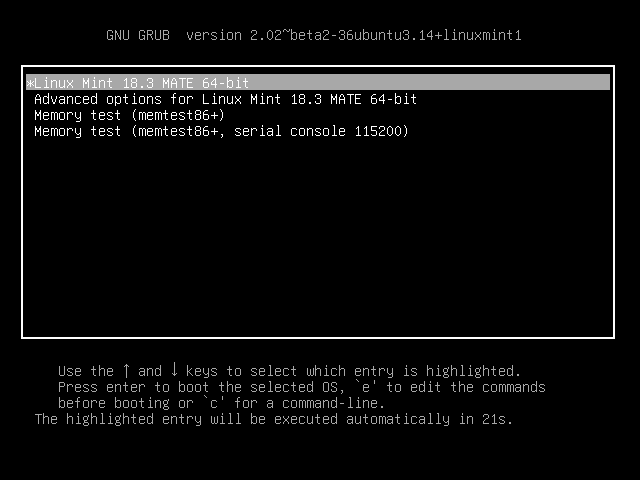 2.) Navigate with the arrows to the end of the line that starts with "linux".
3.) At the end add "nomodeset" (without quotes). Example screenshot below

4.) Then hit Ctrl + X or F10 to boot, it should no longer just be a black screen and you should boot to the installer or Live Desktop.
5.) Install Linux normally
6.) Once again before booting you will have to perform the steps above by hitting e and adding the nomodeset to the linux line.
7.) After booting into your install do this to make the fix permanent otherwise you have to do the steps above each time you boot.

add "nomodeset" to the this GRUB_CMDLINE_LINUX_DEFAULT variable so it looks something like below:

You need to update your grub boot files to make it happen each time you boot.

If you are RHEL based like Centos, Fedora then you would run this instead: