Here is the scenario, you are using QEMU/KVM and are using something like the AC97 sound driver to pass the host audio to the guest via pulseaudio.  This is useful because you can transparently pass your mic input from the host which means you can mute your microphone from the host, which prevents the guest from receiving any mic input even if unmuted.

This issue also seems to happen even if you press the mute button on the microphone and then unmute, it has virtually the same effect as unplugging and replugging the USB microphone.

One thing that seems to help with muting and unmuting button issue, is if you set your Microphone as a single input only (no dual input/output / duplex).

In Mint/Ubuntu, it means going to Sound Settings, Hardware, clicking on your Microphone and just choosing "Input" 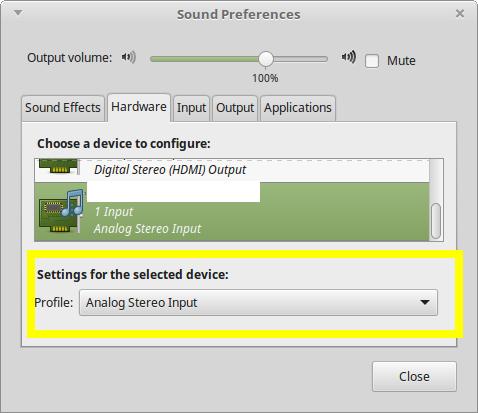 Here is the relevant CLI that makes this audio config happen that gets passed to QEMU:

But the problem is that input/mic audio will break (note that output is unaffected though) on the guest if there is any change to the pulseaudio on the host side during this time:

I am not aware of any solution for this other than to hard restart the guest VM (not just a graceful reset initiated from the VM but a full hard poweroff of the VM).

One other config that I have tried is to use the -device hda-duplex but this seems to be buggy as shortly after starting the VM, mic audio input seems to fail on the guest which means the mic stops working.  This is why I use AC97, as it seems to be persistent so long as you don't unpug the microphone (config CLI below).