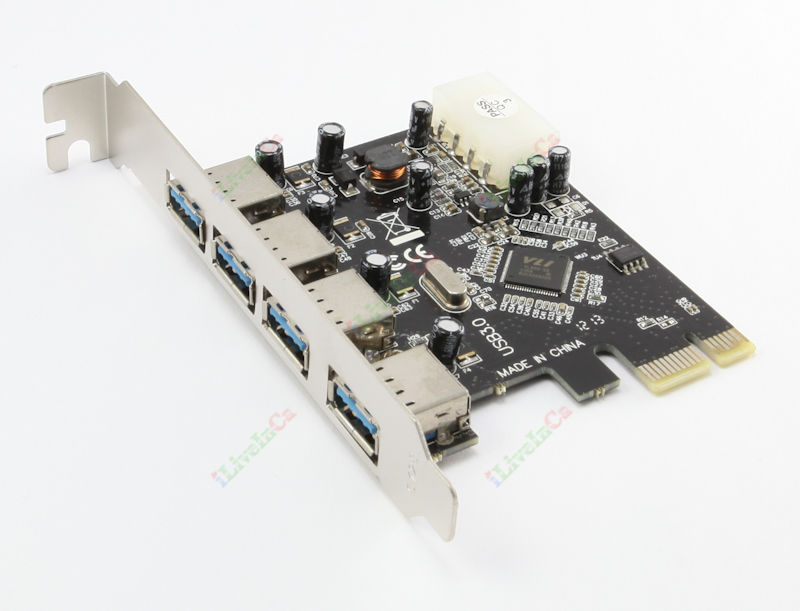 This is a VIA made VL805 USB 3.0 Chipset with 4-ports and MOLEX powered.  First of all this unit was cheap at about only 9 USD with fast shipping.  My biggest concern was if this was a quality unit and would it really give you full USB 3.0 speeds (some people reported with similar cards that for some weird reason they were only getting 50MB/s perhaps they were not using a fast enough device).

In my case I was using a Seagate 8TB USB 3.0 drive, the maximum speed is about 184-185 MB/s and I was able to achieve this speed over this USB 3.0 card just fine.  This is a nice upgrade considering with USB 2.0 I was only getting 39MB/s before!

*Update here is a test on an ADATA 256GB SSD (normally it is around 500MB/s when plugged in as SATA).

197MB/s is fairly disappointing but I am not sure if the USB to SATA adapter enclosure is the issue or not.  However this system is running PCI 1.1 which may be part of the issue.  I believe this is a X1 card and that would limit the speed to 200MB/s I believe (which is basically the result we see).

I actually confirmed it that this X1 card is limited to 200MB/s.  The way I tested was to take both USB 3.0 drives connected to it and do a dd (we know the speed results alone are 189MB/s and 197MB/s separately).

However when doing both drives at once they both get about 100MB/s each proving the available bandwidth is just 200MB/s total.

I haven't done anything more extensive but I am sure it is up to the full 5gbit per second spec of USB 3.0

Excellent value for just $9 USD shipped you get an instant 4-port upgrade with USB 3.0 ports.

I just realized this but you can pay about $13 to order a USB 3.1 (10gbit) card from China vs the $9 USD within North America option.  The USB 3.1 card from China also has SATA power and an internal USB port which is nice.

Honestly if I could wait I would have done this but is it a big deal?  Not really because devices I have do not exceed the 5gbit bandwidth.

Others have complained about this, I was very nervous I would break the MOLEX connector off the board.  Molex connectors usually don't go in easily, I was very careful to try an hold the connector on the board in place while shoving in the molex power connector but even then I was worried I would break it off.  Some have complained of this issue.  I am not sure if the power is needed but would assume definitely for powered devices like HDDs it will help.

I wish this were a x4 Card as this would have given 800MB/s of bandwidth instead.

This is a solid and reilable buy with a VIA chipset and a quick, cheap and easy way to get USB 3.0 ports especially if you have none or just need more!